You are here:
ArcheryBest Bow Reviews 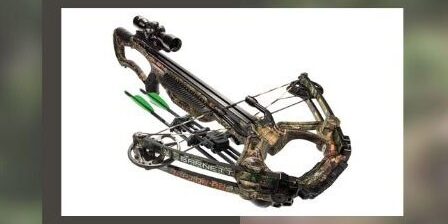 If you are considering buying the Raptor Pro STR but aren’t sure whether it will work for you, our Barnett Raptor Pro STR review may be able to help you.

As a mid-end Barnett crossbow, Raptor Pro STR likely is highly attractive to most of our readers – its performance is sufficient enough for most needs, while its pricing is fairly pocket-friendly. With that said, does this mean that this crossbow will be the right choice for you?

Read on to find out!

Now, let’s have a deeper look into the Barnett Raptor Pro STR crossbow. On our review, we’ll have a look at the features of Raptor Pro STR, touch upon its overall feel and quality, and share with you our overall impressions of this crossbow.

Our Top Reasons to Choose the Barnett Raptor Pro STR

The TriggerTech assembly appears to be the thing that Barnett is the proudest of in its crossbows. This is the first technology that you see on Barnett’s technology webpage. Well, no wonder – it appears that TriggerTech is one of the more important features that make Raptor Pro STR what it is.

The key thing in TriggerTech is its low-friction design – in its TriggerTech assembly, the Raptor Pro STR employs a free-floating roller placed between the holding latch and the sear. What such an interesting design allows for is dramatically reduced friction and a smoother trigger feel.

Just for some perspective, Barnett claims that the trigger weight in the TriggerTech assembly is as low as 3 pounds, while the typical crossbow’s trigger weight falls in the 4-9-pound range. With this in mind, the Raptor Pro STR will offer unparalleled trigger lightness that you may need to get used to if you are upgrading from a lower-end crossbow.

Notably, the creep (the amount of trigger travel before the crossbow fires) is advertised to be zero. Thanks to this, the trigger performance of Raptor Pro STR should be more predictable.

On the other hand, the zero creep means that you should be very careful with your crossbow when it’s cocked, so keep that in mind.

Step Thru Riser for added compactness and reduced weight

The purpose of the Step Thru Riser is to combine the foot stirrup with the riser of the crossbow. This is in contrast to traditional crossbows where the stirrup is mounted in front of the riser.

According to Barnett, the Step Thru Riser allows for a decrease in weight and size of STR-series crossbows (a little more about weight and size later). Apart from that, it allows Barnett to maintain or even lengthen the power stroke of their crossbows without having to place the string beyond the length of the arms.

In addition, the Step Thru Riser makes the Raptor Pro STR crossbow look pretty cool. The Step Thru Riser is made from fiberglass composite as well, so it should not only be very light but also extremely durable.

The string dampeners are also an important feature in the Raptor Pro STR crossbow. Their purpose is to reduce vibrations and sound, allowing for a smoother shooting experience along with possibly added accuracy.

The dampeners pair wonderfully with the TriggerTech trigger assembly since it likewise reduces confounding variables from the aiming and shooting equation.

Note that these speeds are for light 380-grain crossbow arrows – with heavier bolts, the speed will be lower, though you’ll also be getting greater penetration and hitting power.

The draw weight, if you didn’t know, is the amount of force with which you need to cock the crossbow. Higher draw weights allow for higher arrow speed, hitting power, and penetration ability, so Raptor Pro STR is great in these areas.

Finally, you have a rather long power stroke as well –about 16.25 inches. For comparison, the Predator STR crossbow has a longer 16.33-inch power stroke, while Whitetail Hunter STR has a shorter power stroke of 15-7/16 inches.

The 400fps arrow speed in the Raptor Pro STR crossbow is largely thanks to the power stroke – with a longer power stroke, the arrow accelerates longer before being shot from the rail.

I can say from my experience, the Barnett Raptor Pro STR crossbow is the best bow for hunting. But for beginners, you may find the batter solution on our other review on the Best Compound Bow for Beginners.

Although the benefits and features of Raptor Pro STR are more about its performance and power, safety is also great in. It has a wide range of features to keep you and others safe.

First up, Raptor Pro STR employs the patented Soft-Lok floating bristle arrow retainer technology. The purpose of this feature is to apply downward pressure on a loaded arrow. This allows the bolt to sit tightly in its place, which should bring improved safety while the crossbow is loaded.

The second important safety feature in Raptor Pro STR is the anti-dry fire trigger. When no arrows are loaded into the crossbow, a spring-loaded bar engages to prevent dry firing. Although it may seem that as long as there is no arrow in the crossbow, accidental firing is harmless. It can actually harm both you and the crossbow.

Another neat feature is the finger safety reminders. Each side of the rail has finger safety markers to remind you to keep your fingers away from the arrow and the string. This should be a helpful feature for both newbies and skilled shooters. Since finger safety is one of the most forgotten and neglected things in crossbow shooting.

Interestingly, Raptor Pro STR is one of those Barnett crossbows that are made in the single bolt assembly design. What this means is that the crossbow is shipped mostly assembled, so you need to do minimal assembly work before loading your first bolt and shooting.

Barnett includes a good variety of accessories with the Raptor Pro STR as well.

Perhaps the most important accessory from those included is the 4x32mm illuminated scope. This is a pretty expensive and quality piece of equipment that will come in handy when shooting crossbow arrows at long ranges.

For added convenience, the Raptor Pro STR crossbow comes with a rope cocking device as well – this handy accessory will allow for easier cocking by halving the required draw weight, which should be very useful since the draw weight of this crossbow is rather high.

By the way, Raptor Pro STR is compatible with Barnett crank-cocking devices, so for even more convenience and increased rate of fire, you may get one for this crossbow as well. This crossbow also has a Picatinny rail for attachment mounting (e.g. the included scope).

The side-mounted quiver along with two 22-inch Headhunter arrows will also allow you to get started immediately upon receiving this crossbow, while the included lubrication wax should come in handy for maintenance.

Now, let’s talk a bit about how the build and the quality of Raptor Pro STR feel.

So, as a pretty expensive Barnett crossbow, Raptor Pro STR boasts a solid build with durable materials. It’s well-built and seems nice overall – as you’d expect from the money.

Apart from the composite Step-Thru Riser, Raptor Pro STR also has a metal injection-molded trigger; and a CNC-machined aluminum flight track. So it should serve you for the years to come.

In terms of weight and also size. Raptor Pro STR certainly isn’t the lightest and most compact crossbow. In its line Sized at 36.5 x 20 inches (L x W) and weighing 6.9 pounds. It’s a middle-ground model in the STR series.

Length-wise, Raptor Pro STR is actually one of the longer Barnett crossbows. If not for the Step-Thru Riser, it would have been much longer – perhaps too long for most people’s needs. With this in mind, the Step-Thru Riser’s purpose isn’t to allow this crossbow to compete with very small models; rather, its goal is to let Raptor Pro STR retain its power without becoming too large.

If the review is not full of your intentions; we recommend you read deep reviews of our other reviews on almost 10 Compound Bows. I hope you will get something useful about this.

Our Overall Impression Of The Barnett Raptor Pro STR

Within its STR line, the Raptor Pro STR seems like a well-balanced crossbow. It’s positioned somewhere in the middle price-wise, and it also offers all-around very nice performance characteristics. The build quality and feel are excellent as well and the heft of the crossbow. Makes it seem that you are holding a highly advanced piece of technology, (which it really is).

How fast does the Barnett Raptor Pro STR shoot?

The arrow speed in Raptor Pro STR is 400 feet per second with 380-grain crossbow bolts.

What arrow sizes work with the Raptor Pro STR?

Is the Barnett Raptor Pro STR a good hunting crossbow?

With its high kinetic energy, arrow speed, and draw weight, Raptor Pro STR should be a great hunting crossbow. It probably won’t be able to tackle big game, but for most hunting needs, it should be more than enough.

Raptor Pro STR is sized at 36.5 x 20 inches (L x W). It’s a relatively large crossbow. But thanks to the Step-Thru Riser. it’s much smaller than it could have been and smaller than some other available crossbows with similar performance.

All in all, we think that the Barnett Raptor Pro STR crossbow will work wonderfully for many people out there. It offers a very nice balance of price. Performance – excellent if your budget is somewhat limited, or/and if you don’t need a top-of-the-line crossbow.

We think that it’s a great crossbow for beginners and intermediate buyers alike. So whether you are looking for your first crossbow or want to upgrade from your old one. Raptor Pro STR is likely to work.

Michael is an experienced person who is very active in outdoor activities. Mostly he loves to play Archery and Kayaking is one of the favorite recreational hobbies. He is sharing his opinion about various Archery and kayaks; so that a beginner can get started right away. Happy reading!

Complete History Of The Bow And Arrow (2021 Update)